Curious why we are taking fewer vision plans? This article explains why 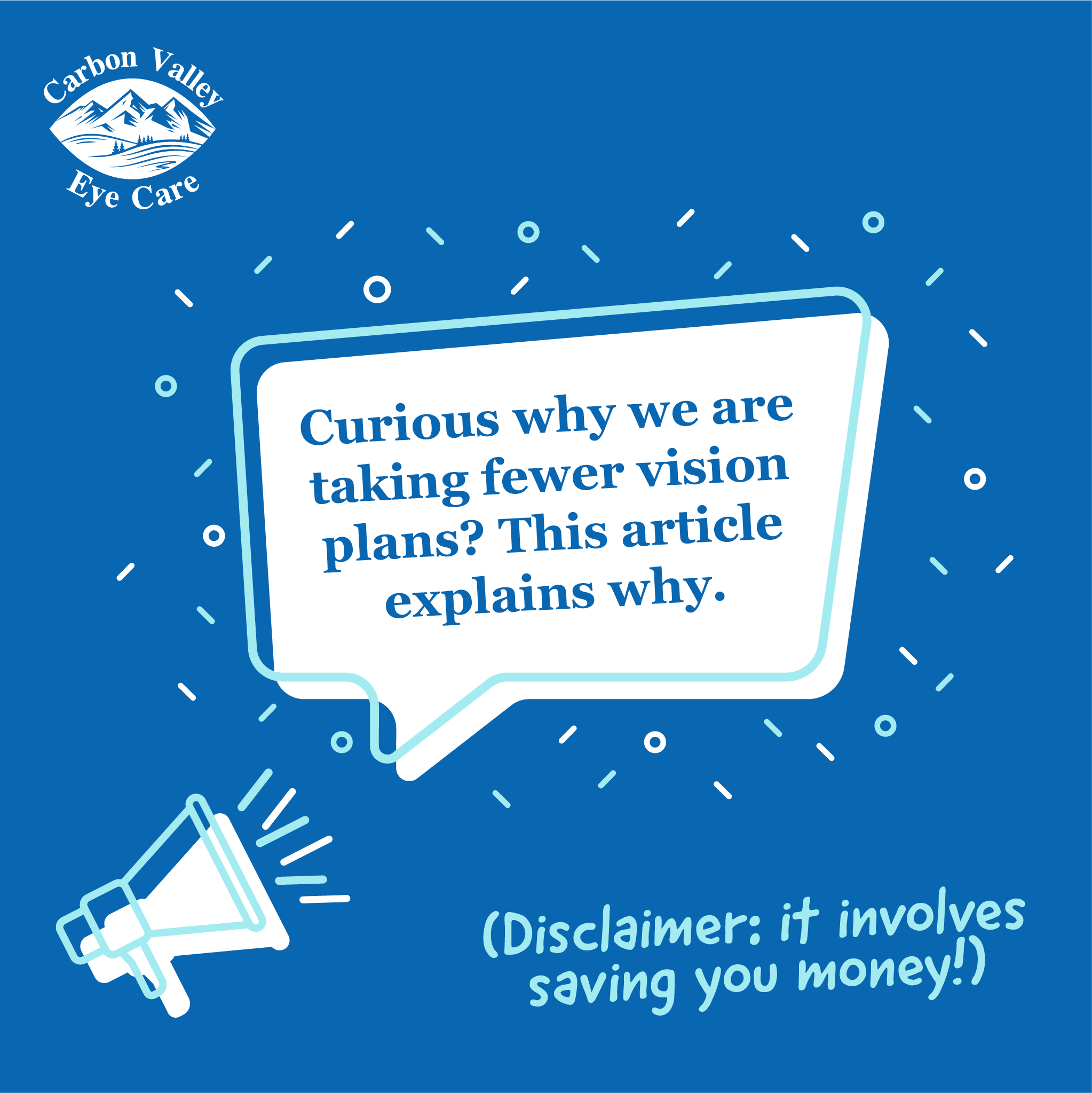 Over the past two years, the economic pain caused by the coronavirus pandemic has spread throughout the health care sector, from major hospitals to family-run optometry practices. The glaring exception appears to be giant insurance companies, which have enjoyed record profits while the rest of the system was weighed down by excessive financial burdens. There is nothing wrong with making money in a free market, but this market is anything but free.

Insurers reportedly are profiting from a system rigged in their favor and are inserting themselves between patients and doctors. For proof, look to the vision and dental coverage markets, where a few large insurance companies control many levers of the marketplace, maximizing their control over patients.

When you visit an optometrist to have your eyes checked and possibly buy glasses, odds are high that your insurance plan will benefit from every part of the transaction. Most of the vision insurance market is dominated by two large, vertically integrated plans. These insurance plans reportedly own many of the country’s largest vision care locations. They also own labs, manufacture lenses, and own most of the recognizable frame makers. Major health insurers have been moving in this direction in recent years, buying up medical practices and pharmacies, but vision plans have flown under the radar as they’ve come to dominate various steps of the supply chain for vision care. The story is much the same for dental care.

This near monopoly on products and services is only part of the story. The dominant plans reportedly cover two-thirds of Americans who have supplemental vision insurance. That gives them an incredible amount of undue leverage to subject independent optometry practices to accept certain terms in plan-provider “agreements.” Optometrists who hope to stay competitive may have to adopt cost-cutting measures that can be financially unsustainable. Insurers also can dictate to doctors the prices they charge for services and materials not covered by their plan and force them to steer more profits to insurers through affiliated labs and products.

Unsurprisingly, what’s happening in the vision insurance marketplace can be a bad deal for patients. A 2016 report from Avalon Health Economics, an independent health researcher, stated that some vision plan practices were designed to “[transfer] margins from providers to plans without benefiting consumers.” Avalon also found that this market structure drove up costs for consumers, especially those without insurance, because doctors are forced to make up for lost margins.

Health care pricing has been a popular issue for years, but little has been done to address how vision and dental plans can drive up consumer costs. While the plans may claim their actions keep premiums low, this is illusionary since they reportedly make much more profit on the services and products that patients inevitably need to buy. Forty-four states have passed legislation addressing potential abuses. But the state laws don’t apply to the one-third of plans that are regulated by the federal government, leaving a need for congressional action.

Democrats and Republicans in the House and Senate have introduced the Dental and Optometric Care (DOC) Access Act, which would prohibit vision and dental plans from price-fixing and establish other measures to protect patients from rising costs and aggressive behavior by insurers. The legislation would provide doctors the freedom to choose laboratories that best fit the needs of their patients. It would limit insurers from dictating network agreements longer than two years, creating a more level playing field between doctors and big insurance companies.

The proposal is especially timely, because the Biden administration is seeking to combat excessive concentration of power and potential market abuses through its executive order promoting competition in the American economy.

This rare moment of bipartisan agreement reflects the urgency for such legislation, as well as an opportunity for Congress and the administration to work quickly to achieve a practical political victory that makes a real difference for patients. Anyone who has experienced an eye-popping bill after a visit to the eye doctor understands why it’s so important — especially if they understand how much money their insurance company likely made along the way while they dig deeper into their own pockets.

The DOC Access Act is practical and overdue. It’s time to stop giving insurers the opportunity to game the system for their own gain.

SOURCE: BY MARIO H. LOPEZ, OPINION CONTRIBUTOR AT THE HILL

Leave your worries at the door and enjoy a clearer and healthier vision.

We're always welcoming new patients and can't wait to meet you. Simply fill out this form to request an appointment

Thank you! Your submission has been received!
Oops! Something went wrong while submitting the form.

We’re welcoming new patients and can’t wait to meet you.